Delta Mu Delta, DMD, was incorporated in the Commonwealth of Pennsylvania in 1952.

In 1963 DMD was admitted to membership in the Association of College Honor Societies, ACHS,  an organization of nearly 70 member international honor societies whose objective is to maintain high standards for the recognition and promotion of academic excellence in higher education.

In 1992 the Society established an affiliation with the Accreditation Council for Business Schools and Programs, ACBSP.

Delta Mu Delta is the International Honor Society for business programs accredited by ACBSP at the baccalaureate, graduate and doctoral levels.

The first chapter (Alpha) was installed at New York University on January 16, 1914. At that ceremony, thirty-two members of the senior class, ten members of the faculty, were inducted as members. Elmer Ellsworth Brown, Chancellor of New York University and John Wanamaker (Businessman) were inducted as the first honorary members of Delta Mu Delta. Elections soon followed with the naming of Bayard H. Faulkner as the first president and Prof. John R. Wildman as the first faculty advisor.

Many chapters were established at accredited schools during the early years of the society. Early members included such schools as St. John’s University of New York, University of Pittsburgh, University of Cincinnati, Northwestern University, Memphis State and Georgia State college of Business  Administration. The Alpha Chapter performed the functions of the national headquarters office of Delta Mu Delta.

Because of many lapses in the Greek Letter sequence, it was agreed to rename all chapters.

On August 12, 1952, a corporate charter was granted under the laws of Pennsylvania. The corporate chapter was amended over the years to meet the requirements for membership in the Association of College Honor Societies and the requirements of the Internal Revenue Service under Code Classification 501-c-3, educational and non-profit. Delta Mu Delta tax classification permits donations to the society to be tax exempt for donors.

In 1963, Delta Mu Delta was admitted to membership in the Association of College Honor Societies (ACHS). From that point on, the Society has experienced steady and sound growth. Membership in ACHS assures all chapters and their members that Delta Mu Delta meets the highest standards set by all of the member societies in all fields of learning.

The Greek letters in the Society’s name stand for
Dia Matheseos Dynamis,
signifying Delta Mu Delta’s motto:
Through Knowledge, Power
the power to manage creatively for social and economic good.

Becoming a member of Delta Mu Delta is an honor indicative of earnest, intelligent purpose and rewarding achievement.  This should be a goal of every person pursuing a degree in business administration where Delta Mu Delta membership is possible.

The standards of Delta Mu Delta are high. Although many may not gain the Key, they should remember that the hard work done will bring its own rewards. 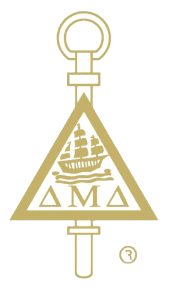 The Delta Mu Delta key is the symbol of our Society most often seen by the world. The key awarded to all new inductees as evidence of their membership. The key has been the society’s symbol from the time of the its founding. It has undergone many changes as the Society has changed. Delta Mu Delta formed to promote higher scholarship in the study of business and to recognize and reward scholastic achievement in those studies. Like Phi Beta Kappa, the honor society to which three of the five founding members belonged, Delta Mu Delta would have a key, a symbol by which members could identify each other and recognized for their achievement. From the first induction in February of 1914, the founding chapter at New York University presented these keys to new members. Although the key does not appear to be required in the early days of the Society, we find in the financial statements of N01ihwestern’s Epsilon Chapter the expenditure for a quantity of keys to match the number of members inducted. These early keys appear to have been meant to hang from a watch chain or something heavier. The key was two sided. Central to the design of the front side was the Greek letters with the year of induction above and the university name below. We have a sample from 1927 on the obverse side the key bore the symbol of a mercantile ship under full sail, representative of commerce in all its dimensions. Curiously, on this older version, there is no English wording “Delta Mu Delta.” As the society began organizing itself around a strong national chapter in the 1950’s, the key became more standardized. A single die was made for the keys, with the suggestion that the name of the university could be engraved on the reverse rather than stamped on the front. This became our Society standard. In ensuing years, the design has been modified so that today the ship and the Greek letters appear on the same side to allow the key to be worn pinned on a lapel or on nickels.