When the pandemic forced GCU’s Eta Chi chapter of Delta Mu Delta to conduct its induction ceremonies via video conferencing, it turned into a blessing. It opened the way for more inductees, many from out of state, to participate in Tuesday’s virtual event. “I don’t believe we’re ever going to go back to the inductions we had in the past,” said Dr. Moronke Oke, a chapter advisor. 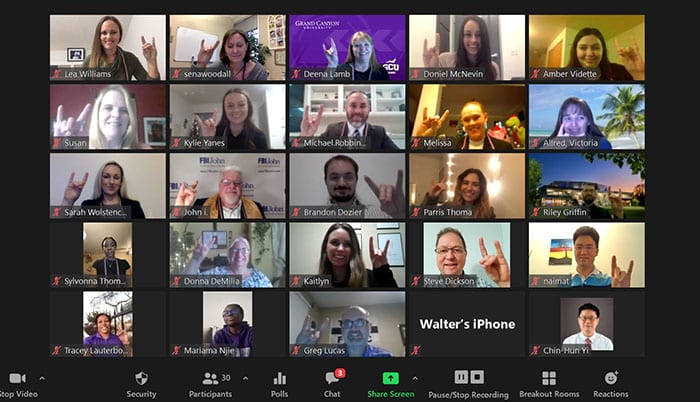 Back in the day, long before a pandemic turned video conferencing into a frequent method of business communication, there was this thing called a telephone.

Dr. Kevin McClean would use that device to do many of the inductions into Grand Canyon University’s Eta Chi chapter of Delta Mu Delta. Because most of the inductees were online students who did not live in Arizona, McClean would have them recite the international business honor society’s pledge over the phone.

McClean, a beloved professor in the Colangelo College of Business (CCOB) who retired in 2016, recalled those ancient days as he watched Tuesday’s induction ceremony, conducted via Zoom. Soon after, he reminded the chapter’s advisors, Dr. Moronke Oke and Dr. Helen Hammond, what that was like.

“I remember way back when – this is before I was involved in Delta Mu Delta – I would walk past his office and I would hear him having these phone calls,” she said.

But here’s the irony: By preventing this year’s inductions from being in person, the pandemic has turned back the clock.

In recent years, Eta Chi induction ceremonies featured only those people who could attend – and some did travel long distances. But now there’s no going back. With 78 people being inducted into the society this week, many of them participants in Tuesday’s event, Oke said Zoom inductions are here to stay. “Every cloud has a silver lining, right? One of the things we found out with this is that it’s something we can adopt in the future,” she said. “Now people from other parts of the country can call in and participate.

“I don’t believe we’re ever going to go back to the inductions we had in the past. Even when we go back to having the in-person inductions, we’ll still have the online version. Now we know what to do.”

And now they can see the people inducting them, and vice versa. It’s just one of the ways Eta Chi has benefited from Zoom this year, cementing its status as the winner of the Anthony J. Jablonsky Outstanding Chapter of the Year Award.

“We’ve been able to do a lot this year because we have Zoom,” Hammond said. “Two virtual inductions, a speaker series event, a networking event – Zoom is why we’ve been able to get the accolades that we’ve been getting over the last nine months.

“It makes it so much more inclusive. We’re able to include more of our students.”

It’s still an exclusive society: To be eligible, students must have at least 24 GCU credits and rank in the top 20% of their class. But Oke and Hammond want online students to reap the benefits of membership and feel like a part of the chapter, even if they never visit campus.

One of the inductees Tuesday is a man who has spoken at GCU numerous times in recent years, retired FBI agent John Iannarelli. He was inducted as an honorary member, something Oke had been considering ever since she heard him speak at a Phoenix-area event several years ago. “I was literally rolling off my seat laughing. He was just so funny,” she said.

Iannarelli’s talk Tuesday was more serious: He urged his fellow inductees on making a difference in business by being “significant.”

CCOB Dean Dr. Randy Gibb also shared an important message when he addressed the gathering. He wants businesses to be “healing organizations” with executives who lead in a Christ-like manner.

“We need our business leaders to solve problems and capture values,” he said. “The government cannot do it alone.”

Among the attendees were three members of the Delta Mu Delta national leadership team: Dr. Kevin McCarthy, President; Jeff Arnold, Executive Director; and Dr. John Lewington, chair of the Membership Committee and a member of the advisory board. In his remarks, McCarthy echoed Gibb’s sentiments when he said, “We do need our best and brightest business students more than ever.”

And he added: “The Eta Chi chapter is an exceptional place.”

Two of those best and brightest are graduating from GCU next week: Alisen Vrabel, Eta Chi’s Vice President, and Brandon Dozier, Services and Events Coordinator.

Next, Eta Chi will prepare for its annual Research Colloquium, named in McClean’s honor. The late February event, shepherded largely by another Eta Chi advisor, Tracey Lauterborn, also is expected to be conducted via Zoom.

But that’s no problem anymore. Video conferencing worked for the inductions, and it will work for the colloquium. As they used to say in those old telephone commercials, it’s the next best thing to being there – and Eta Chi is making it the best possible thing.